Let’s do a more sunny photo today. I took this one already few years ago, but since I never edited or posted it, I’m doing so today. There are still thousands of photos I taken over the years I never posted. My photo library is really quite big.

This photo was taken from the top of the Durnstein castle in Austria. I used the 200mm lens to zoom in on the area on the other side of the Danube river, with all the vineyards around. The result made for a really hazy photo, as the day was very hot and sunny. I’m including a comparison to the original image, just so you can see the difference here.

This is a single exposure, edited in Photoshop. 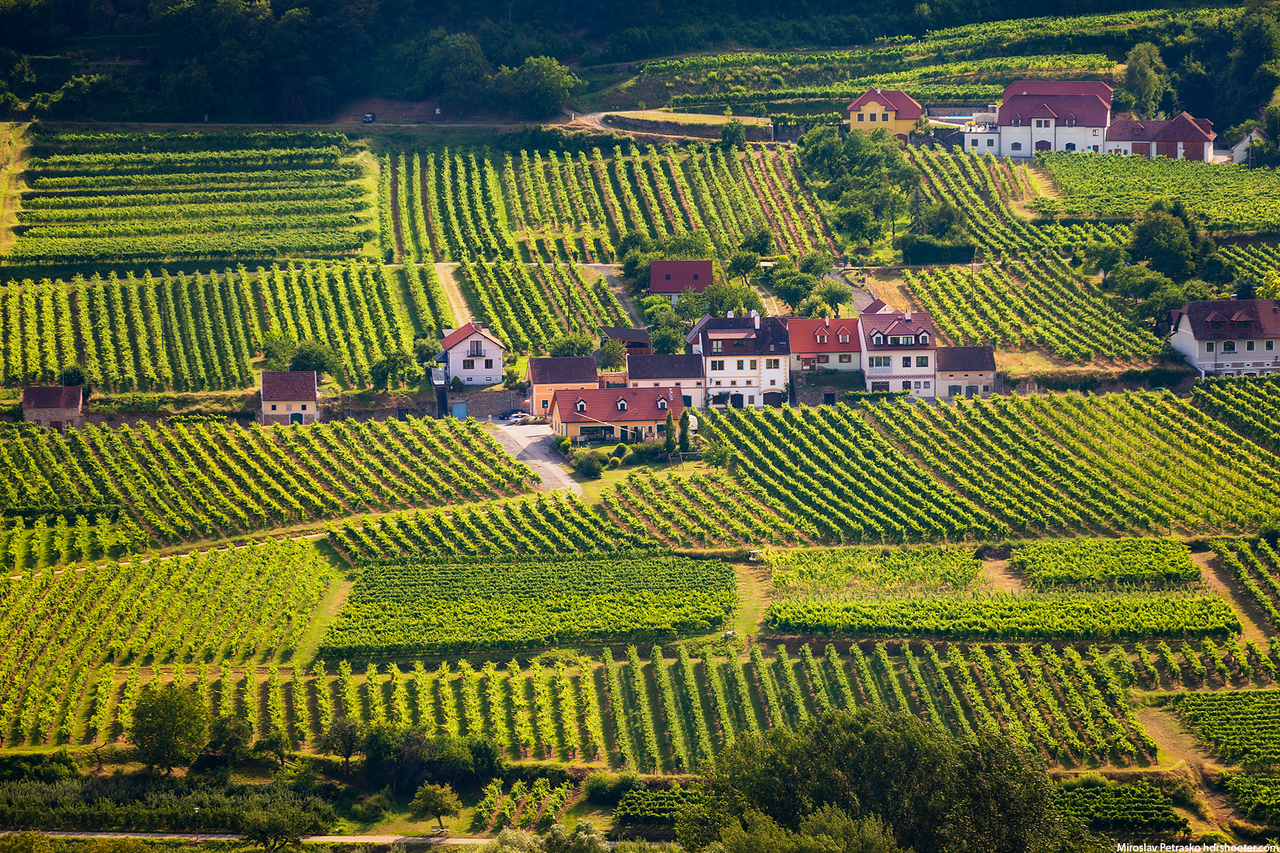 And here is also a comparison to the original RAW file. 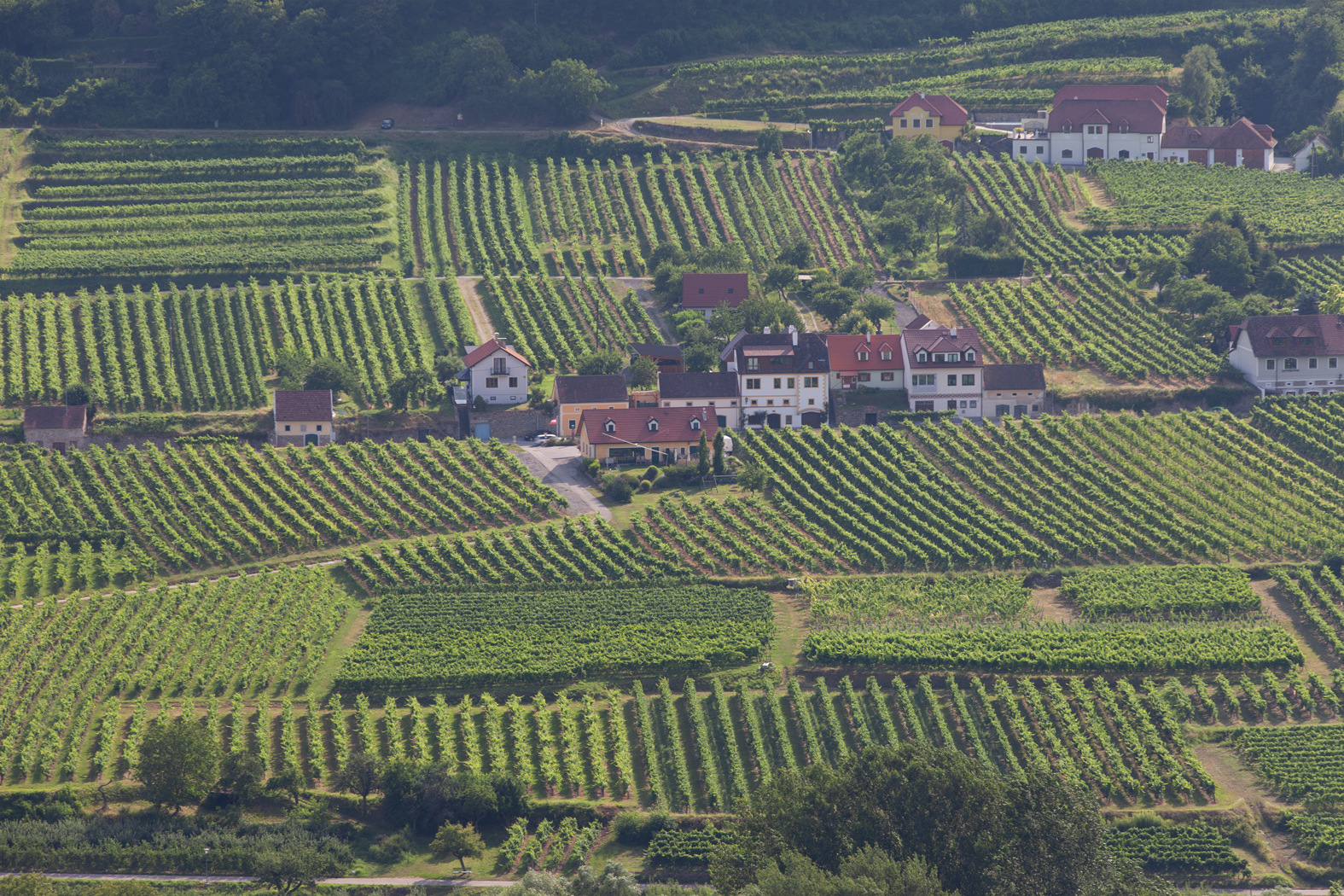 Lit up clouds over Hainburg

Lit up clouds over Hainburg

Sometimes the clouds can be so low, that they can reflect all the light from the ground. Like that, you get clouds that look much warmer than the rest of the sky. Same in this panorama taken from the hill above Hainburg in Austria. The clouds were so low, that when town lights changed their color completely.

I think I mentioned this before, but this one is one of those, unplaned panoramas. I mean, I took the photos as two separate shots, not for a panorama. But, since they were taken close after each other, with similar settings, I could still fit them together. I find I do this quite often. Sometimes it easier to see something when you calmly think about it while editing, instead of being in a hurry in the field when you are losing the light.

This is a two-shot panorama, each shot blended from three exposures in Photoshop. Combined into panorama also in Photoshop. If you want to know how that is done, check the guide here.

High up over the clouds

High up over the clouds

It’s so cool when you are in high mountains, and you go up and up, and you get over the clours at one point. It was same when I took this photo in the Austrian Alps, at the Grossglockner High Alpine Road. If I remember correctly, this was taken from the highest point on the road. When I got there, the clouds covered everything around, so it was like walking in milk. But over time, they started to break up and you got some great view of the scenery.

This is a two shot panorama, each shot from a single exposure. Combined and edited in Photoshop. I was quite lucky to go to the Botanical garden yesterday. The forecast for the rest of the week was rain, and they were right. It was raining the whole day today in Bratislava. Not really fit for nature photography. But to keep to the topic, here is a photo I took during a rainy day like today.

I visited Salzburg in Austria multiple times already. But I have yet to post a photo from there. The reason is, I have none. I have been there in the Summer and also in Winter. And each time, it rained. It rained heavily. So no photos were taken. But on my first visit few years back, since it was raining, we vent to the Red Bull museum there. It’s full of beautiful cars, helicopters and planes.

There were quite a few people inside, but since they allowed for tripods (not sure if it’s still like that), I decided to try to take some photos. And after few tries, I even managed one without any people in it. Ok, to be completely honest, there were some legs visible in the back, but those I could remove easily in Photoshop.

In this photo is the shiny silver Red Bull B-25J Mitchell World War 2 bomber that was displayed right in the middle of the museum. It makes for a bit of a busy photo, as the plane blends with the background, but I like it. It silver, so it reflects everything anyway. It’s a blend of three exposures, done in Photoshop.

If you want to visit the museum, it’s called Hangar 7 and here is it’s location on Google maps. 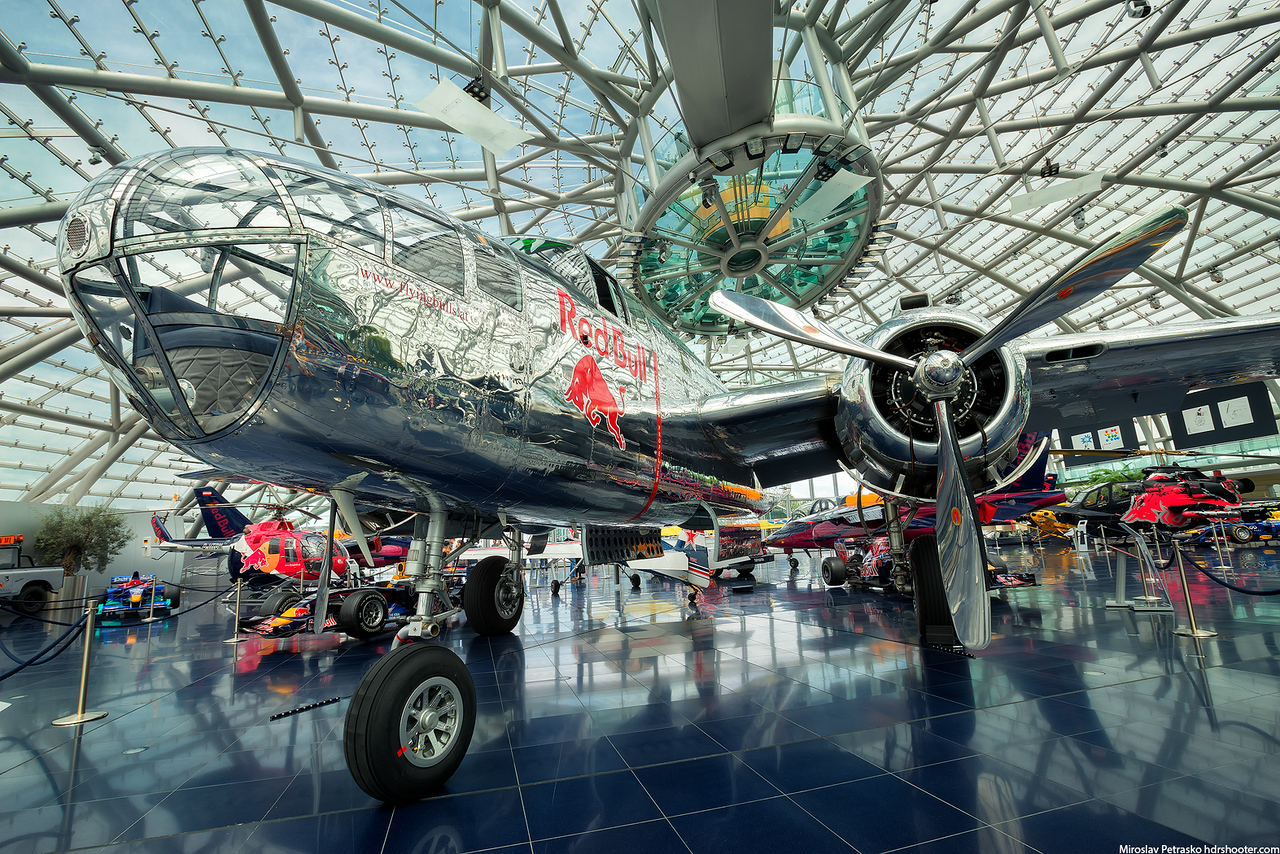 It’s always funny, that closer a place is, the harder it is to visit. Vienna is less than one hour drive away form Bratislava, and yet I have only few photos from there. Being so close, it makes it much easier to just say, I can go there anytime, and go somewhere else. Really have to fix that this year, and finally also put together a Top photography spots list for Vienna. Should have been done a long time ago.

Here is a panorama I took in Vienna already few years ago, but I never edited it. It’s a three shot panorama, each shot blended from two exposures. Combined, blended and finished in Photoshop.