So after Bratislava and Prague, the third city I’m adding to my Top 5 spots list is Budapest. There are much more great spots there than on this list, but not all are publicly accessible or allow the use of a tripod. Still I will ad few more later on, which I think are great, but I don’t yet have any good photos from them

To see all my photos from Budapest, check out the Budapest category here

If you don’t have much time to prepare yourself before the trip, to check out the best places for photography yourself, check out Photo tours in Hungary for guided offers from one of my photographer friends Miklós Mayer.

Before I get to the spots, let’s first look at the best day to visit. The 20th of August is the St. Stephnes day celebration in Hungary. This is something comparable to the Independence day in the USA. So same as there, also in Budapest there are celebrations. There is a huge street market with some great (really great) food, lots of attraction and the best thing of all, a huge firework over the city in the evening.

Be ready of course for a huge number of people, but one can catch a good spot for the fireworks if one goes early enough. I would suggest at least two hours before the fireworks. I would go either to the castle fortification, or to the Citadella. Both give nice views. First photo here is from the castle, second from the Citadella. 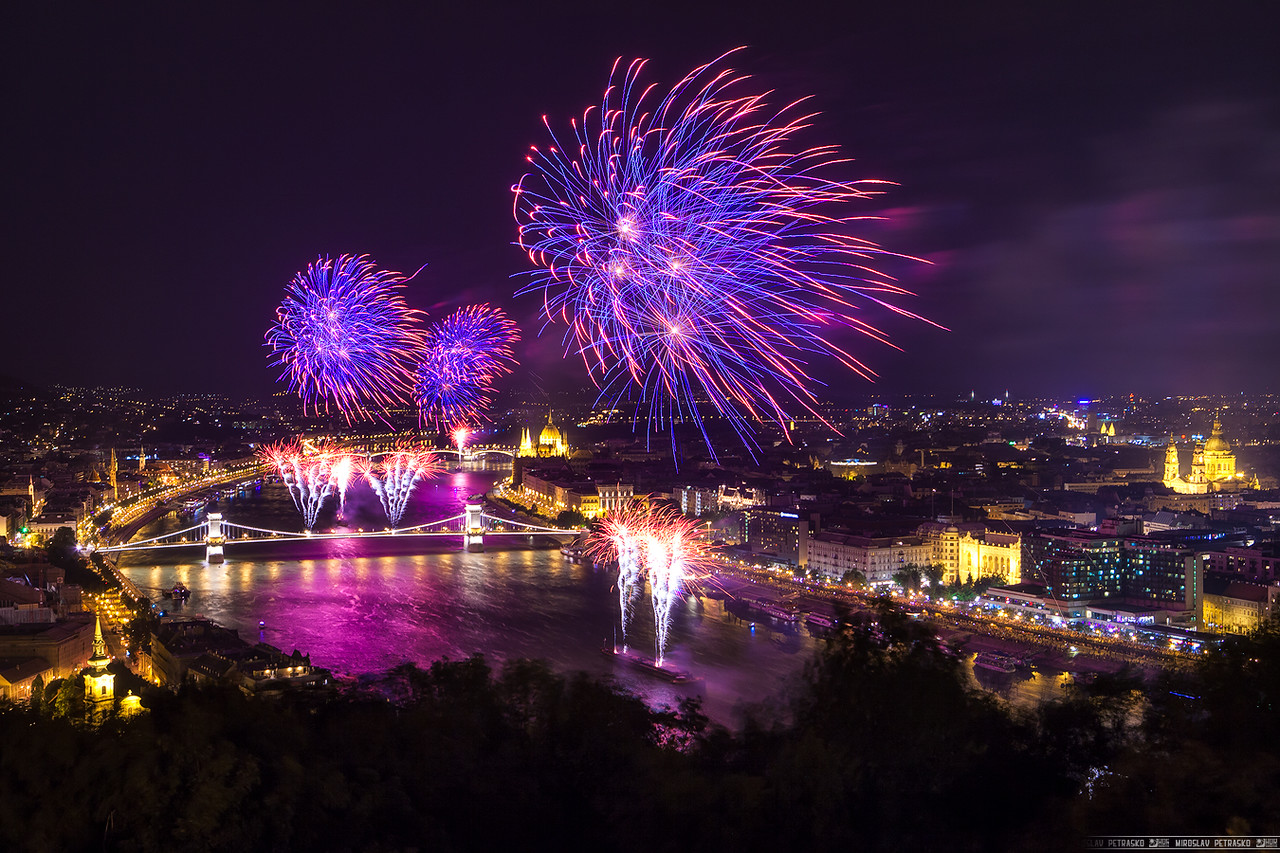 At the Chain Bridge

I have to start with my favorite subject, a bridge. The Chain bridge that is. It really looks great at any time of day, but from my experience, the best view is during the sunrise. Especially during the very short time, when the lights are still on and the morning blue hour starts. This is only for about 10-15 minutes each day, so you have to be quick. Also be very careful when going to this spot, as you have to cross a busy street with no traffic lights (you are going there on your own risk).

Also, you can get very nice photos with the lion statues and the heavy traffic on the bridge. Opposite from the Parliament

Another spot where you should go for the sunrise. There are two reasons for this. First the sun goes up behind the Parliament. The second, that early in the morning there are no ships and you will get a reflection in the water. During other times of the day, the river is too busy and there is no reflection. Also finding the spot that is exactly opposite the Parliament is quite easy. As you walk along the Danube, you will see a metal part on the bank, and you are there :) 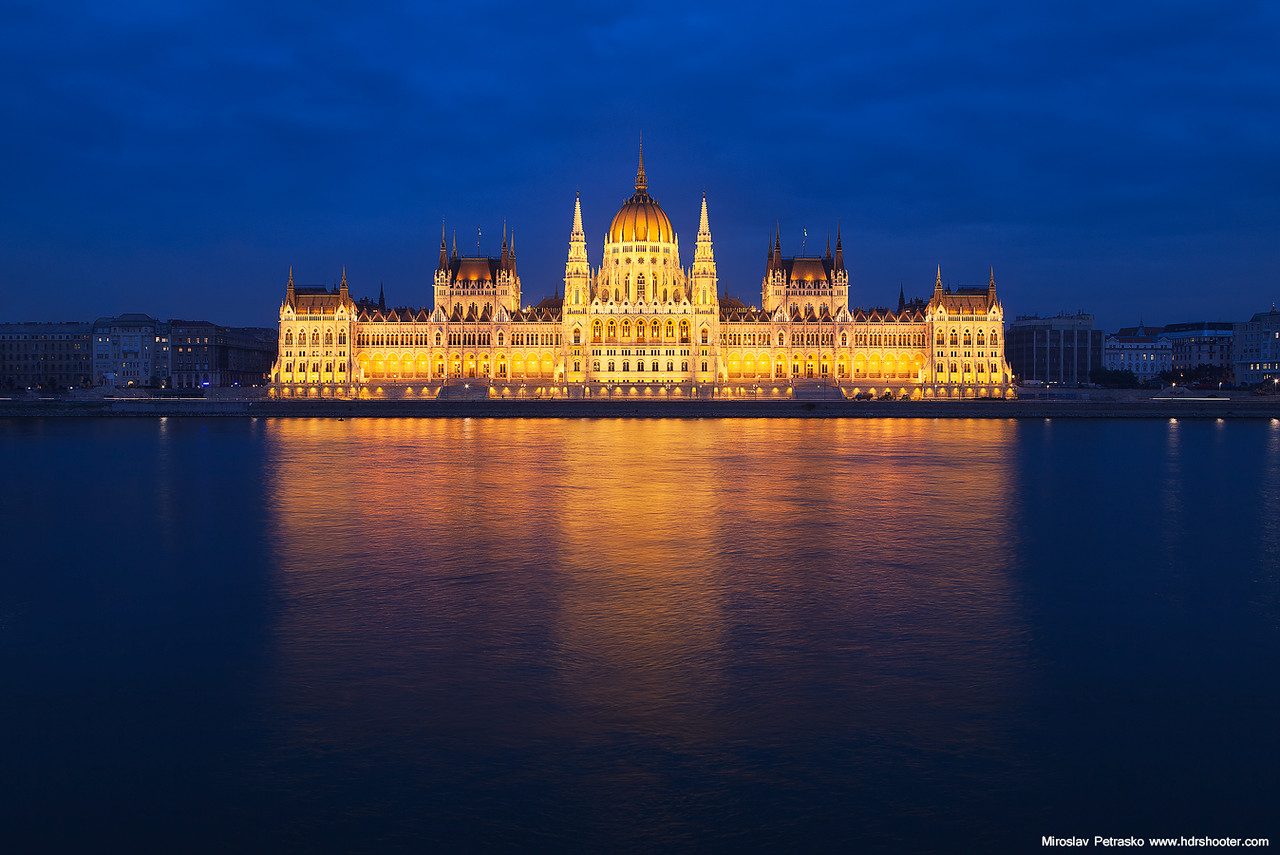 I tend to prefer spots where you are allowed to use tripods without a permit, but will have to make an exception for the basilica. It’s just so beautiful. And with a little luck, you can use a tripod also here. Just prepare everything before you enter and quickly take your shots :) During one visit I was able to shoot freely with a tripod for 10 minutes, before I was asked to not use it :) At the Liberty Bridge

Liberty bridge on its own looks really great from any position. But once you get there you will notice a cross on a hill above the bridge. That’s the place I like. You have to find you way up there but it’s worth it. Just be careful if you stand on the edge, so you don’t fall down (as usually, enter at your own risk :)).

Of course the view from under the bridge is also great, but mostly the one from the other side of Danube.

By the Fishermans Bastion

The Fisherman’s Bastion is atop of a hill above the city, right next to the castle. It gives you a great view, but it’s mostly closed. But right next to it are two smaller bastions with a walkway between them. You actually have to pay to enter the walkway, but if you are there for a sunrise or a sunset shots, the walkway can be entered for free (usually if you see no one sitting by the entrance, it’s free :) ) 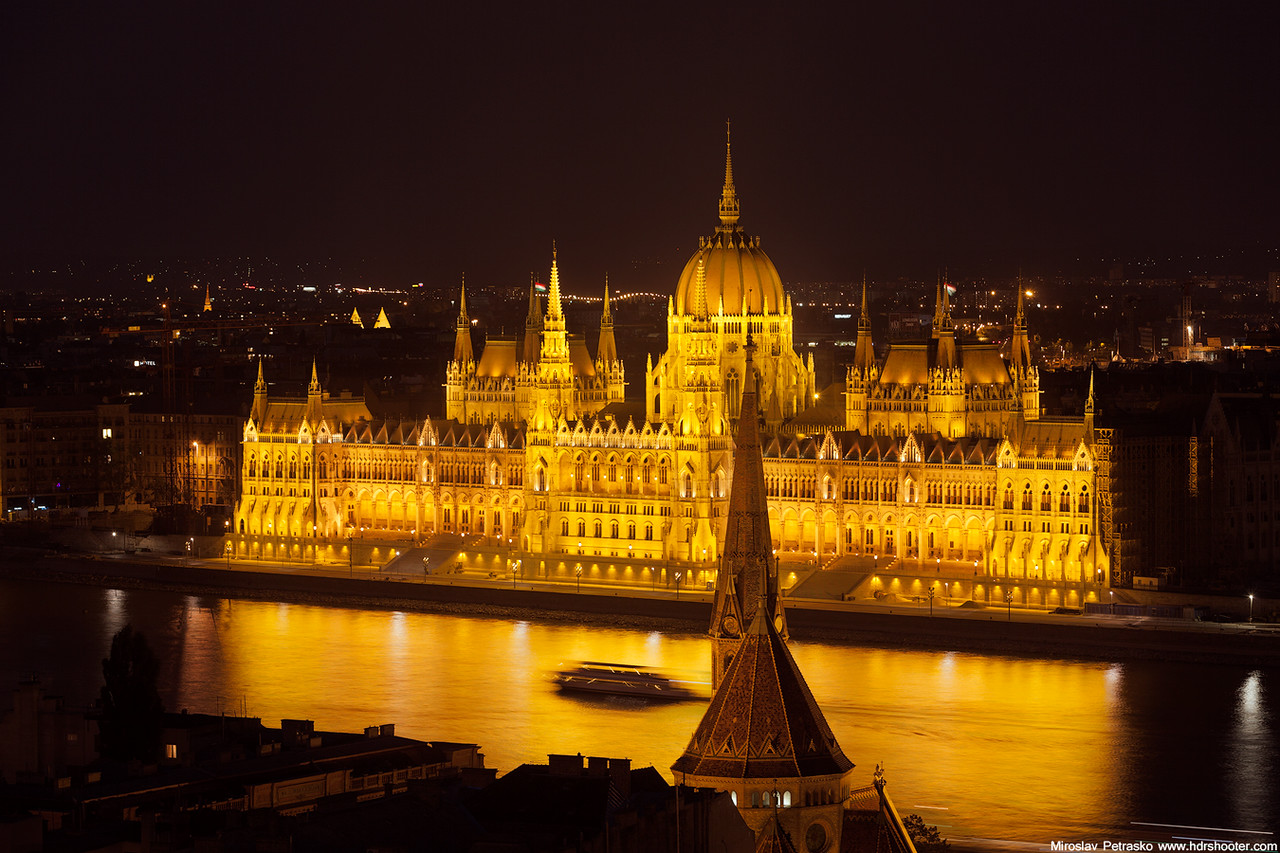 Right next to the Fishermans bastion is the Matthias Church. It’s a beautiful church that has only recently been reconstructed from outside and also from inside. There are many things to get photos from here, but what I would recommend three. The fist is the view from the walkway I mentioned in the previous spot. Second is inside the church. You have to pay the entrance fee, but they never had issues with me using a tripod, so you can get a nice shot. The third is from the top of the tower. It the highest spot in the city and while you have to walk up many (and I mean really many) steps, the view is worth it. 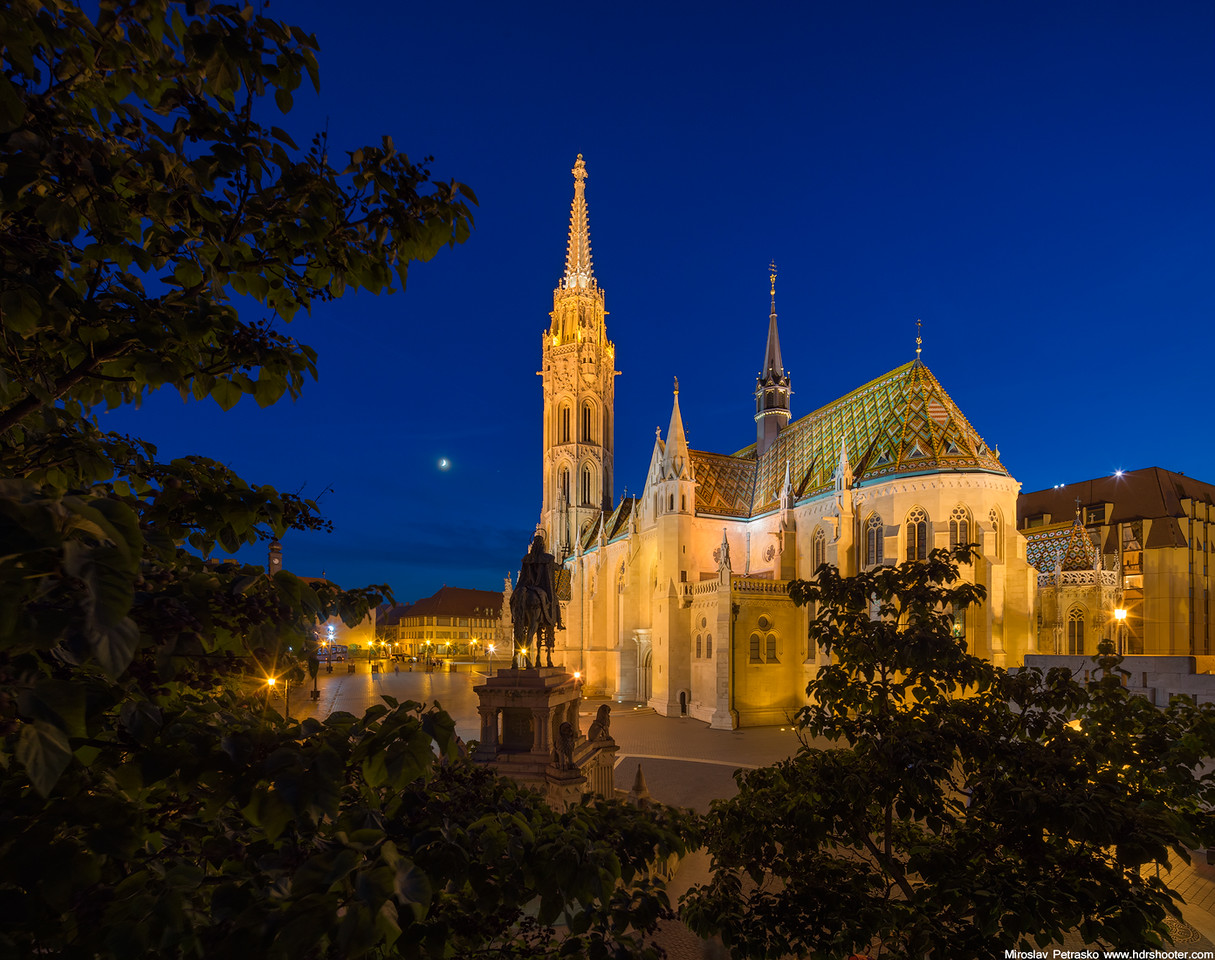 The platforms in front of the castle

After the reconstruction few years ago, there have been two platforms added to the castle fortifications. Both of these have a great view of the city. The first one has completely unobstructed view, the other one has a statue in the middle, but still worth the stop by, as it is so close. 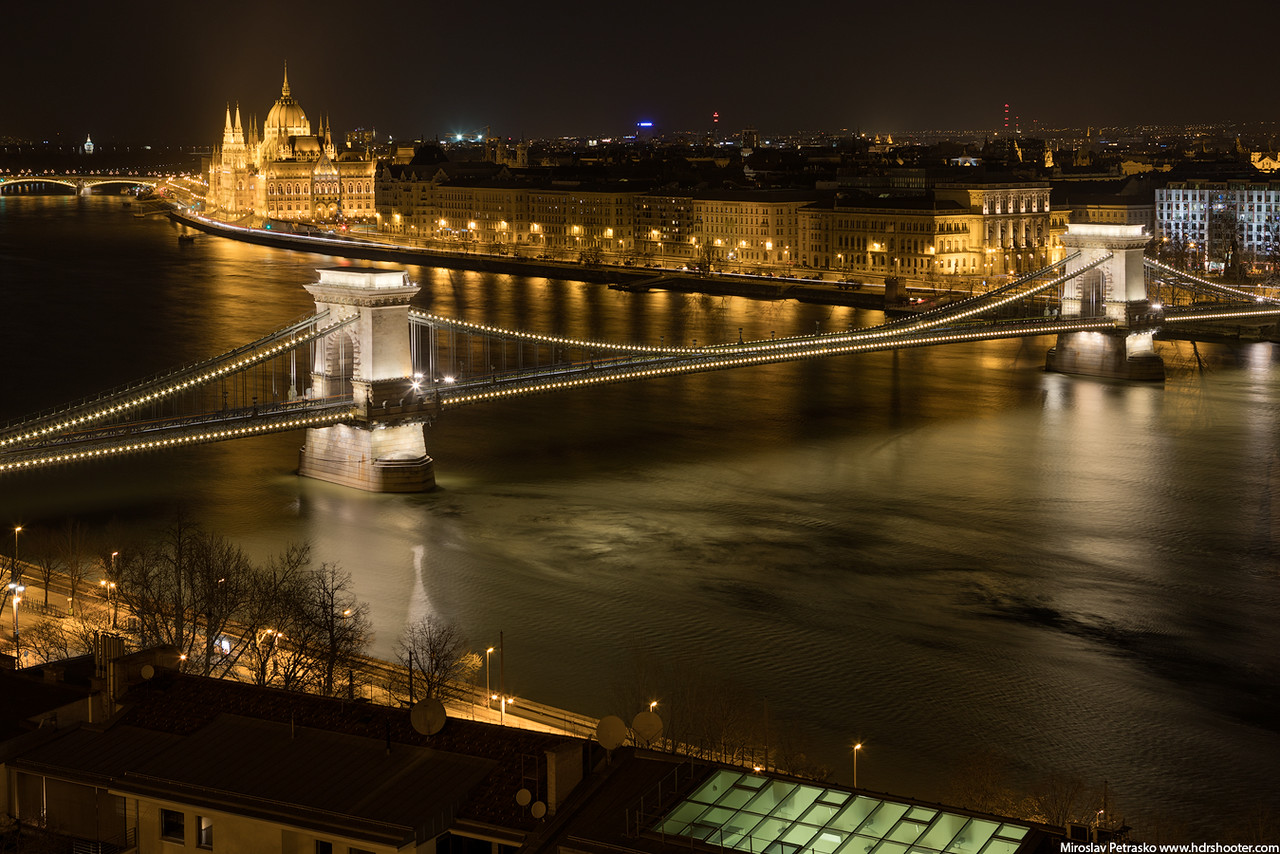 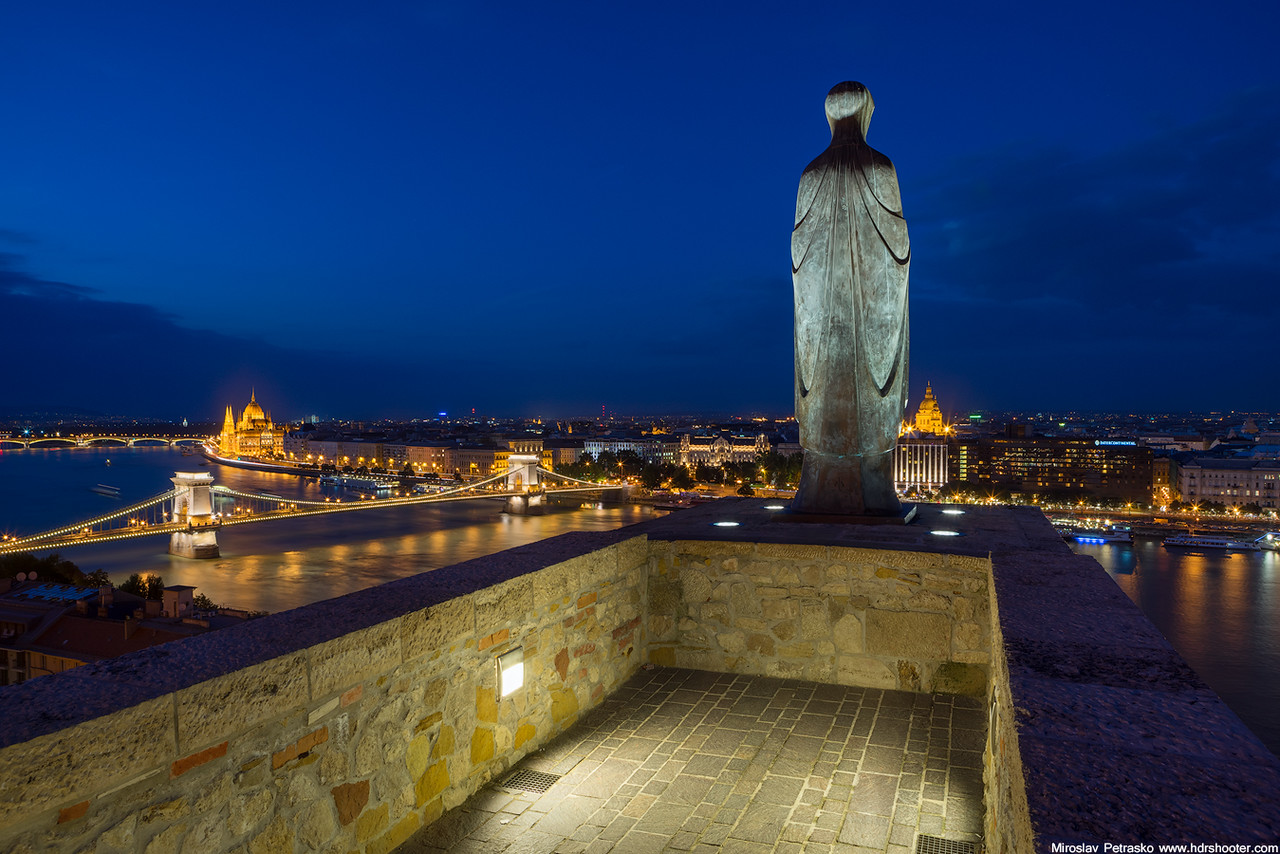 Another part that was created in the reconstruction, are the castle steps, that go down most of the castle hill. You can take an elevator to go up, and then get this great view towards the city with the steps going there. Or you can take photos over the little wall to the right, that give you a view of the new castle park. 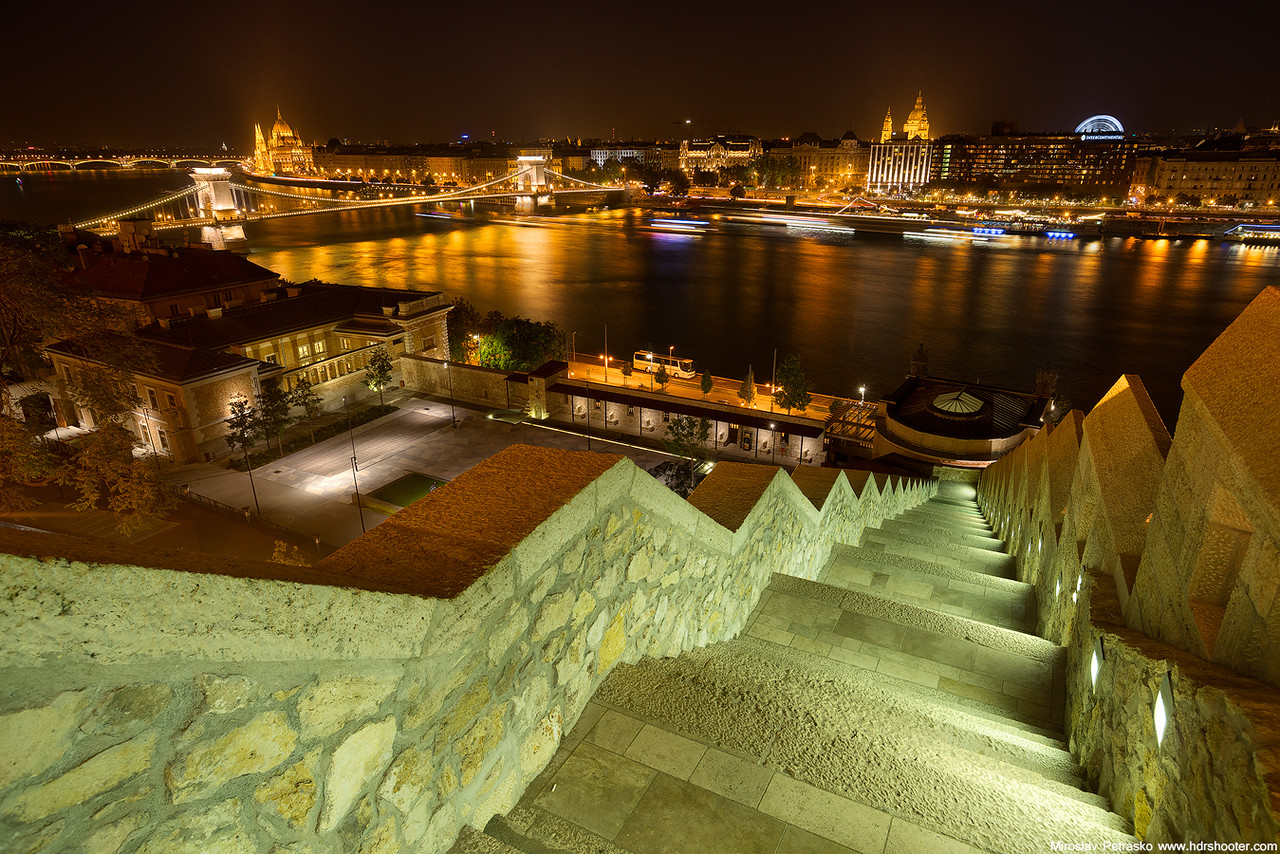 If you want to combine you photography evening with some drinks at a great location, I would suggest visiting the High Note SkyBar. It’s right in the middle of the city, next to the St. Stephens Basilica and it offers a great view. While I was there, I was able to use a tripod without any issues.

When you go there, I would suggest reserving a table beforehand, as it may be full, and they will not let you in in that case. But you can try also without a reservation, but will just need to have luck then. 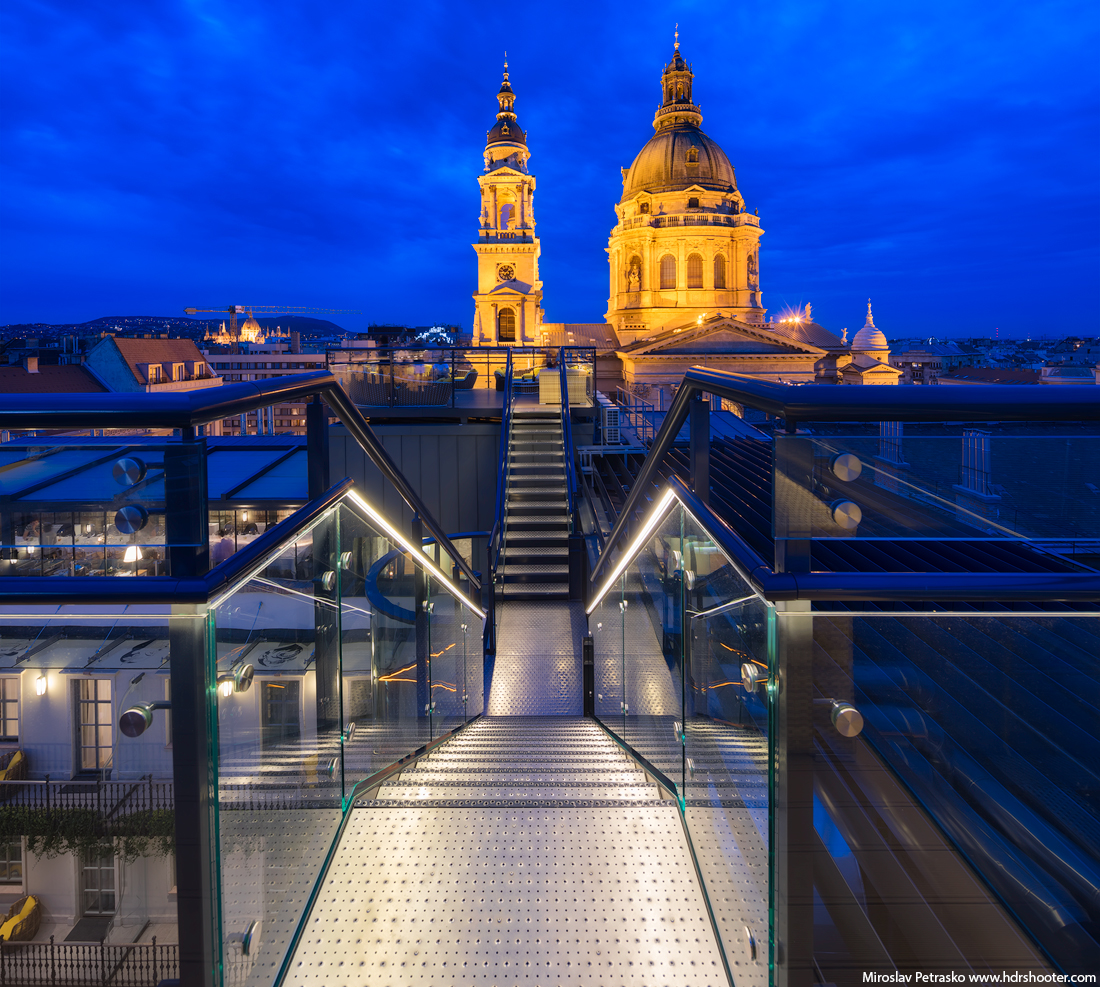 This square just looks stunning. You have all this huge statues, and this very symmetrical look with the pillar in the middle. It’s usually very busy in the day, so as I did for these two photos, I would suggest going there in the early morning. You will be there alone.

Around the Hungarian Parliament

You can try taking photos in front of the parliament, but as it’s really big and you are close, it’s not so easy to get a nice one. Quite better view is from behind. Especial if you go to the small waterfall fountain that is there. If you get really close, you will get a wonderful reflection of the whole parliament. It creates a very nice view there. 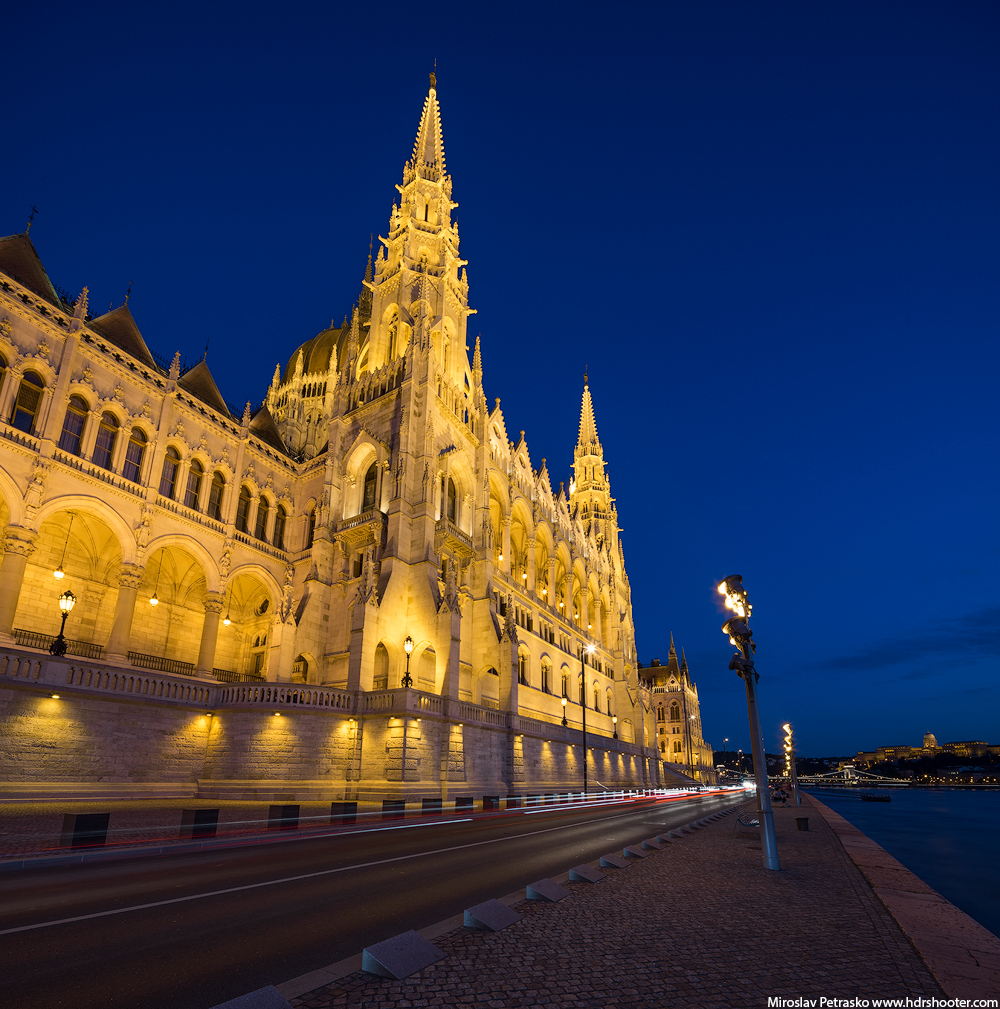 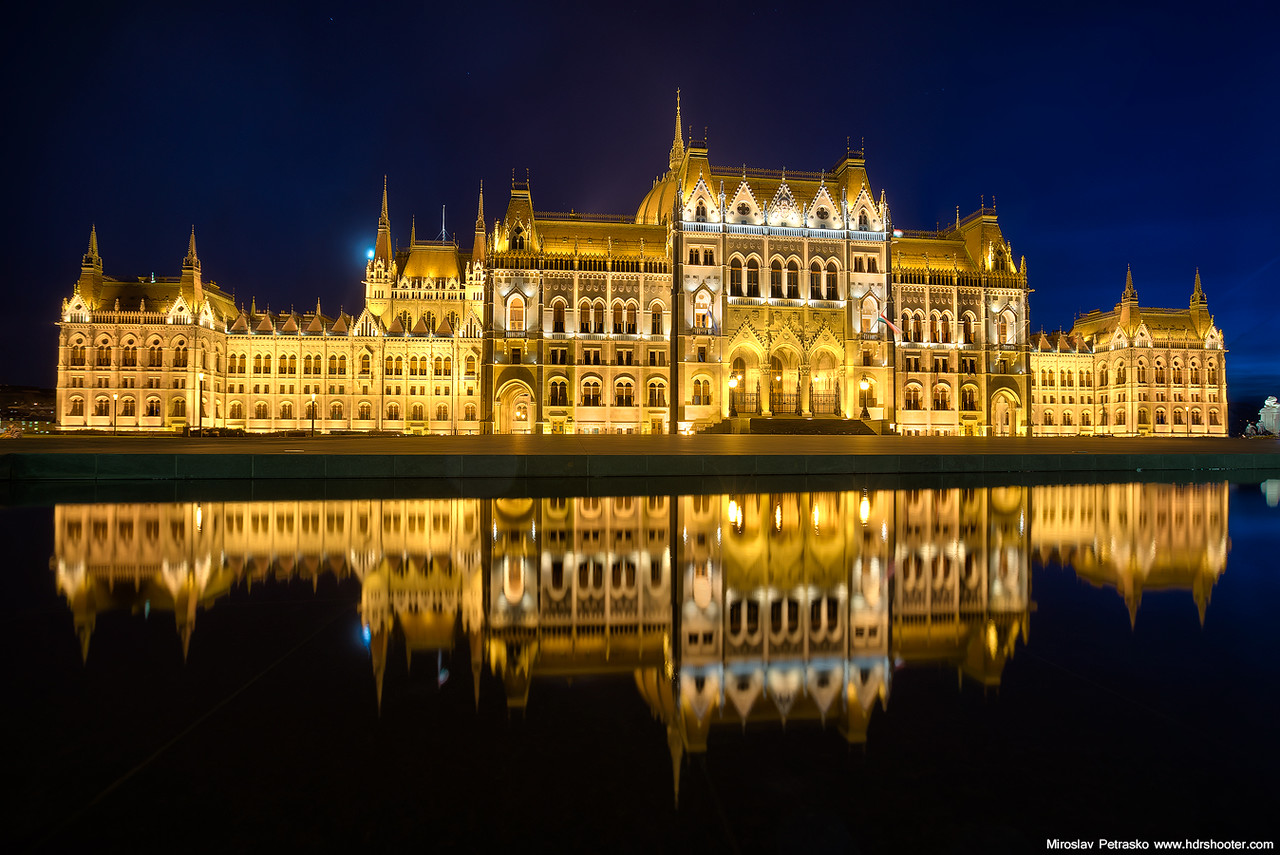 At the Margaret Bridge

Another great looking bridge in Budapest. You can take photo from under it or from it, but be warned as it shakes quite strongly when the trams pass by. Not great for long exposures. My favorite way to take photos here, is to frame the parliament building under the arch of the bridge. Looks great. 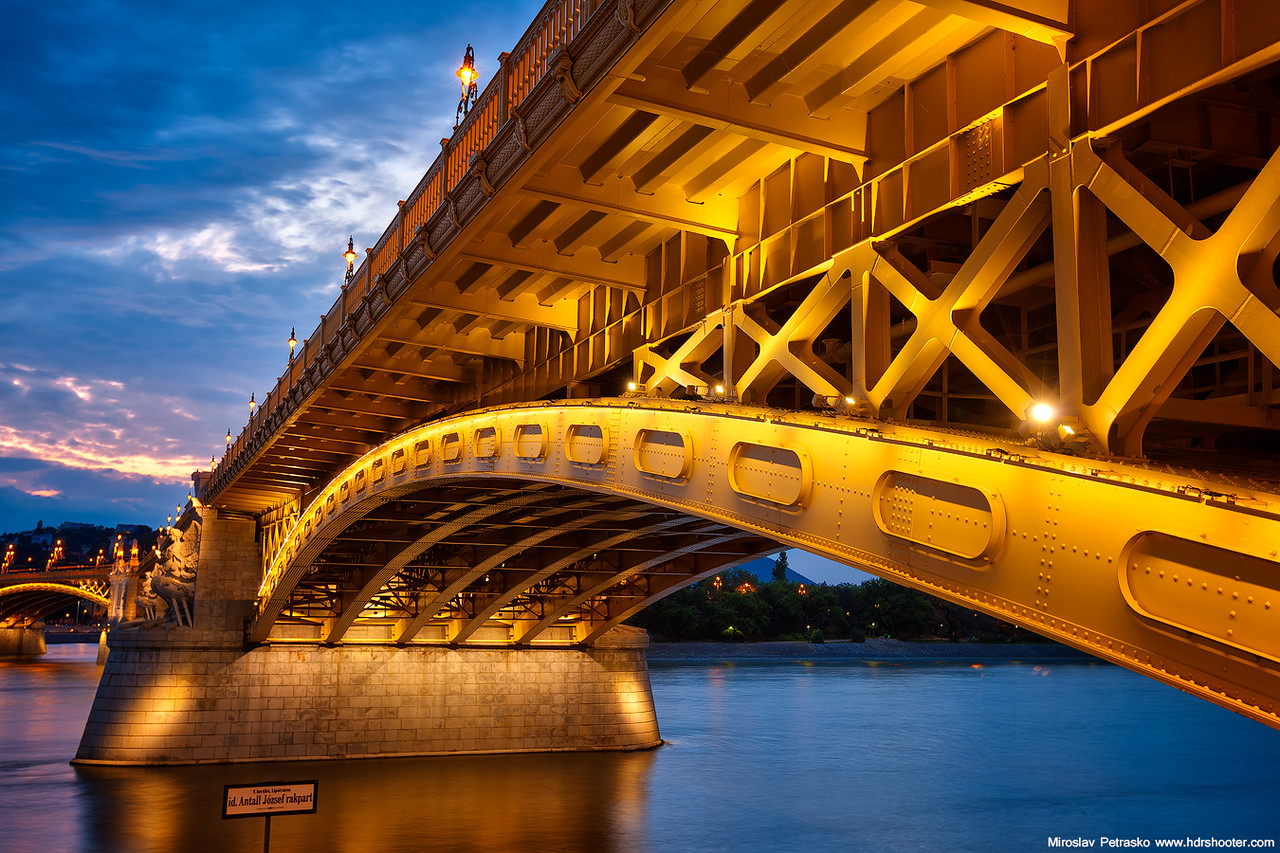 Citadella is very high above the city on the hill. The view from there is great, but getting there is a bit harder. You either walk up many steps up the hill, take a taxi or the hop in buss. The normal city transit buses don’t go up here.

You get as a reward a great view of the city and as I mentioned before, it’s perfect for the fireworks time. 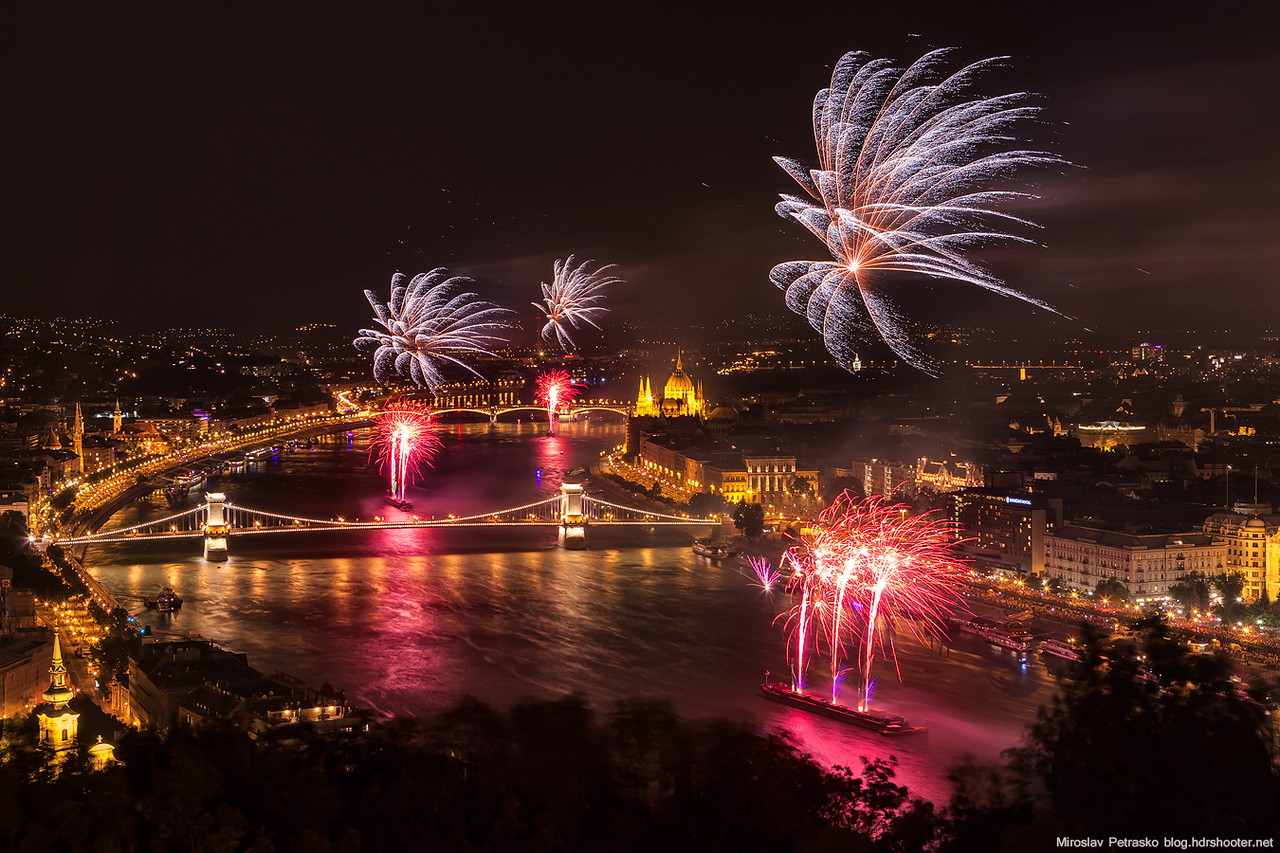 These are my top photography places in Budapest. If you want to see more, explore Budapest with a local photographer who will reveal you many other great spots for photography, check out Photo tours in Hungary.