I posted already few photos from the Prague metro, and this is another one. As to make this post a little more interesting, here are also photos from three other metro stations I posted before. You notice the same composition and that is on purpose. I also have different ones, but the symmetrical ones look the best here. The symmetry combined with the repetition of the architecture works just perfectly.

So here are the three older photos and here is the new one, this one is a manual blend from three shots, taken at the Charles Square metro stop.

Porsche at the Vysehrad

I really hate it when there is a parking space right in front of a beautiful landmark. I think the areas around those should be walk-only zones and parks, not a parking space. The cities in Czech republic are quite bad in this. You often have parking spaces right by the historical buildings and quite often in the middle of walk-only zones. It makes the whole area feel worse.

Same here by the Vysehrad church. Horrible place for a parking area. And why? Just because there is a restaurant? Really bad decision on the planers part. Placing a parking area in the middle of a beautiful park (look at the map).

I wanted a photo from the front of the church for a longer time, but can never find the space empty. Same the last time I was there. But as there were some nice cars there, I decided to use them in the photo. There was this Porsche and a Bentley. Actually while I was taking this photo the owner came to pick up something from the car, and due to a very long exposure, you cant even see them. I did’t get to the Bentley, as another car parked right next to it as I finished this photo.

While in Prague, I searched for a location I haven’t visited yet during sunrise. And the one that came to my mind were the castle stair. I just forgot how many stairs there were, which I got reminded of very quickly at 5 in the morning. But it didn’t stopped me and I got to the top of them to get a photo :)

One just cant return from Prague without more photos of the Prague castle. It’s just so dominantly placed above the city. Anywhere you shoot, you just pass a nice view of it eventually.

This is a manual blend from 10 photos, two series of 5 photos combined into a panorama. 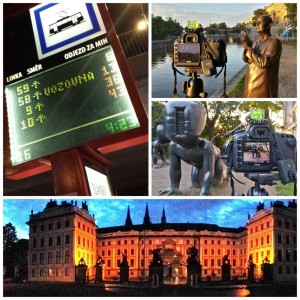 While in Prague I was quite tired from the Dresden trip (driving through the night and arriving at half three makes one tired :)), but at least one day I got up for a little morning photo shooting. Still getting up at 4 in the morning is not so easy, but I managed somehow. One would think that the trams would be empty at such an hour, but to mi surprise, they were packed full.

I made a little walk around the castle and the Charles bridge and got few shots. It’s so nice to have the area just for yourself, which is just not possible during the day.

I’m including few behind the camera shots, which I posted on FB during that day. Btw. I’m creating the multi-image frames in an android app called PhotoFrame. It really is nice and very easy to use.

This is a manual blend from 5 shots, taken in front of the Prague Castle. You can see here the Tomáš Garrigue Masaryk statue. He was the first president of Czechoslovakia.