As I mentioned before, I visited Astana in Kazakhstan few weeks ago. I can’t really share the photos with you yet, but what I can show you, are few photos from the exhibition I’m a part off. Big thanks to Altair for sending me the photos :)

(the second photo is not mine, just including it to show you how the display looks like)
So if you are in Astana, Kazachstan, go to the city center and check them out in person.

Normally you would never get me to take photos at a day like the on I took this one. It was over 40 degrees Celsius outside, with zero clouds and crazy sunny. It was hard to even stand outside in the sun. But as I only had about 2-3 hours in the city of Salamanca, and I knew there is this old Roman bridge there, I wanted some photos of it. And I do not know If I go back, ever.

Good thing in such a weather though, that there was almost no one else outside. Just other crazy people like me :). So I had most of the bridge for myself. I really liked this composition, with the 4 lamp framing the cathedral in the distance. And I again did a panorama here to get more of the surrounding of the bridge into the photo. 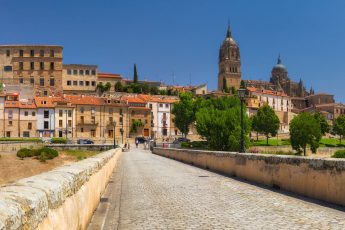