Which one is your favorite lens? For me it’s definitively the 17mm tilt shift lens. It’s just so perfect for architecture and cityscape shot. I get so much into a photo, that I would not get without it. And yes, I used it for today’s photo :)

So is it Bayterek tower or Baiterek tower? I found both spellings on the internet, and even both in the same articles (on Wikipedia for instance). I would presume it’s Bayterek tower, as that looks more close to Russian spelling, but I don’t really know.

I was thinking of going also up to check out the view from insides, but did not get to it in the end. But I did get a lot of photos in the area around it. For this one, I found the biggest puddle that I could, to get a perfect reflection. And I got it :)

A moment after I got this photo, a little boy started riding through the puddle on his bicycle. And his timing was always perfect. When I was setup to take a long exposure, he would ride through the shot. When I changed my settings to a fast shot, to catch him in the photo, he would move away. And he did this repeatedly :) But I already had one clean photo, so I was satisfied with the result.

This is a three shot vertorama, each shot from 5 exposures. The Beyterek tower has just too many light on it, and they are all very bright. Blending them into a photo is really not easy. 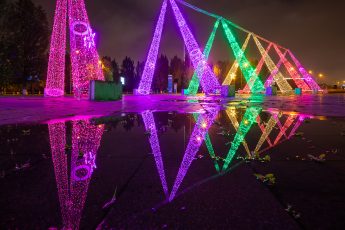 Light tunnel in the morning