I shared my impressions of Topaz JPEG to RAW AI last week with you, but I forgot to mention one thing. Today is the last day it’s offered for the introductory price of 79.99 USD. From midnight it goes to the regular price of 99.99 USD. So if you are interested, now is your chance to get it cheaper. Head over to the Topaz Labs website to order, or download the trial there and give it a try.

When one starts blending exposures, one sometime just blends everything. And that’s the case with today’s photo. I call it a triple blend, because it’s:

Somehow it’s funny as one uses all there techniques, that one stops even thinking about them anymore. One just does it automatically.

I posted a similar photo last week, but I liked them both so here is another one. As snow is not that common in Bratislava, in the last few years, I had to take as many photos as I could of it. I don’t think there will be much more this year. And snow covered rocks at the Danube make for such a nice foreground subject.

As I mentioned, this is a blend of three exposures. It’s a vertorama where the top part is a blend of two exposures, and the bottom part is a single exposure. I combined them manually in Photoshop. It’s pretty simple, as the middle is a river, so you just blend them using a layer mask and a bit of painting with the brush. You can’t use any panorama software if you want to do a focal blend, as they will not align the photos that way. 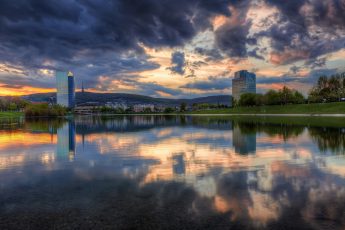