Sunset at the Bratislava Castle

Sunset at the Bratislava Castle

I do like colorful photos. And sunset can give you so much color. And autumn and early winter sunsets can be so beautiful. Like this one. This is a bit different view of Bratislava castle, as this photo is taken from the Michael’s Gate tower. The balcony there is easily accessible if you visit the medieval weapons museum that is in the tower. Just having a sunset during you visit is only possible in Winter as they close quite early. 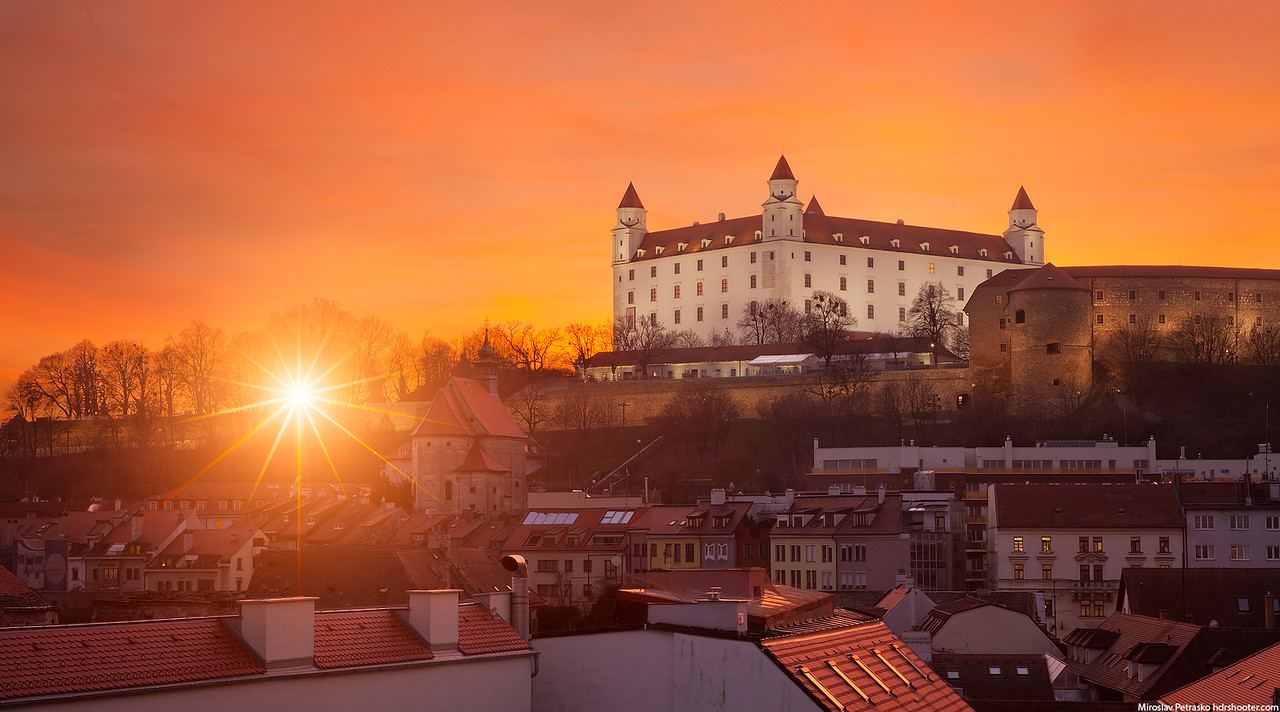 I been a bit sick recently so I have not been out to take photos in a while. But I decided to go out today, and I ended at my favorite spot in the city center right after sunset. So today, I have for you a new photo from Bratislava.

This is a two shot panorama. I used a 10 stop ND filter here from VFFOTO. I did quite underexpose the shot, but with the RAWs from the Canon 5D mark IV I was able to overexpose enough to get what I wanted. Panorama combined in Lightroom, finished in Photoshop.

Yesterday I updated you on my reading list, and I forgot to mention one great source to find great books. Each year, Goodreads has Choice awards for the best books. And right now the 2018 ones are slowly reaching the final winners. I always have a look at them, to find some great book. Only yesterday I found The Seven Deaths of Evelyn Hardcastle by Stuart Turton as one of the nominees, and I’m already half way through :) If you want a good book to read, I would have a look there.

While browsing my photo archive, I stumbled also across this photo. And as I never posted it here before, here it is :) I actually took this one on the first January of 2017. It’s one of those perfect dates when to take photos. That, and the week between Christmas and New Years, are the times when there are very few people in the city centers. Everybody is at home or with their families, which makes the city a photographers playground. Each time I can I go out to take some photos.

This photo is a single exposure, edited in Lightroom and Photoshop.

Been a while since I did a reading list update, so i will do one now :) Recently I got through 6 books, three fiction and three nonfiction. Let’s start with the nonfiction ones.

Somehow the three nonfictional book were all with the same subject. Skepticism and critical thinking. Each one just look at a different thing to by critical about. The Skeptics’ Guide to the Universe by Steven Novella, Bad Science by Ben Goldacre and Paranormality by Richard Wiseman. All are very interesting to go through and are worth a read (or listen :))

From the fiction part, I was quite disappointed by the Elevation by Stephen King. Just an interesting premise with no payoff at the end. The other two Inner Space by Merlin Fraser and The Others by Jeremy Robinson were quite better stories, even if not as developed as they should be.

Have not yet decided what to listen to next, but will update once I got through few of them :)

There has not been much snow in Bratislava the last few years, but what we have a lot of is fog. And the season for for is slowly already starting. Not that much yet. This shot is not from this year, but from 2016. I do think though, I will get some new ones soon :)

For this photo, I used two exposures. Blended in Photoshop, to get the brightness of the lights a bit down. Photos like this one are not that easy to edit, as one can easily crate a really strong color banding. But there are ways to get rid of it, and you can see my guide on that here.

This photo is not a panorama, I cropped it to this aspect. Usually I don’t do that, and keep the standart 3:2 aspect ratio, but slowly I’m warming more and more to the idea to give a photo the aspect it just fits the best. No longer keeping to the classic one. Probably from doing so many panoramas and vertoramas that are not in the classic aspect, I got used to it.

Heart of the people

I have been posting a photo from the All Saint’s Day every 1st November for years now. And this time it will not be different. Again I stopped by the nearby Martin’s cemetery today, and took few shots of the remembrance candles all the visitors are placing on the graves there.

As usually, the play of all the lights looked spectacular and made for one very beautiful atmosphere. This photo was taken at one of the statues in the Martin’s Cemetery. Visitors placed all the candles so they created this heart shape, and I tried to catch it in this photo. Was not completely easy, as I was surrounded by people, but with the 12mm Laowa lens I could stand really close and still get the whole shape.

This is a 5 exposure HDR blended with the original exposures. HDR created in Oloneo Photoengine, blended in Photoshop. 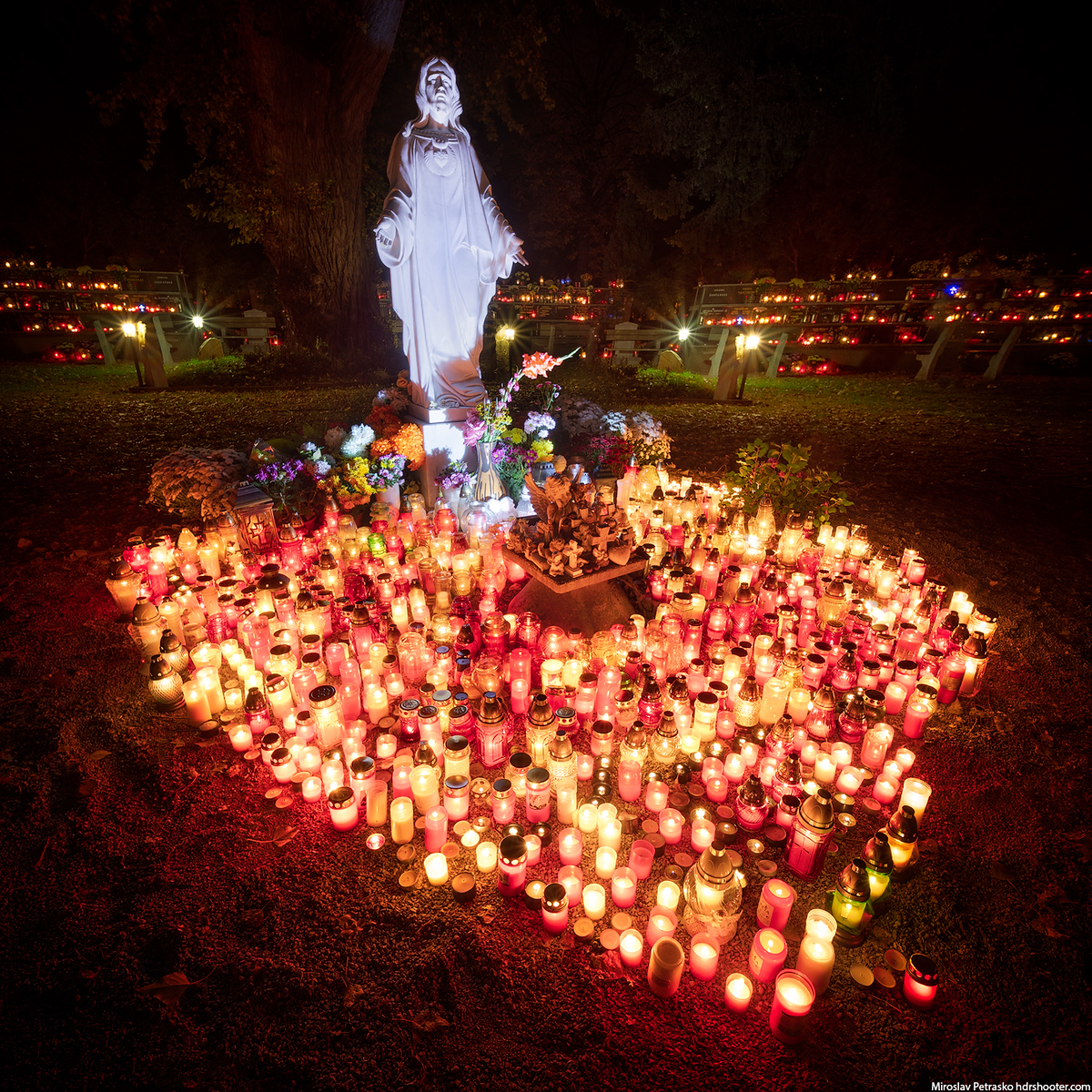