I think you all noticed that Canon introduced their first full frame mirror-less camera yesterday. I did too. And my first thought was, this looks similar to the Nikon one doesn’t it? That aside, it seems to be an interesting camera, that I personally am not that interested in. It’s not a disappointment or something like that, but it’s also not something spectacular that I would run out to get immediately. Having a full frame mirror-less is just catching up to everyone around them and I hoped when they do, there will be something to distinguish them from the other brands. But I have not seen anything like that yet.

Still, when I get my hands on one somehow, would love to test it out. Maybe it can win me over. You never know :) And when it’s time to upgrade my camera again, maybe the EOS R II will be the way to go (if there is ever one :))

I did not want to post another photo of the Expo 2017 sphere building in Astana so early again. But it’s just such a cool looking building. And especially like this, at night with all the lights on.

Here I managed to capture it completely in one color. But that I needed to use a longer exposure really helped with that. I also moved a bit back to get the fountain right in front of it. I could not get the exactly what I wanted, as parts of the square were fenced off due to constructions. Still I got almost to the spot I wanted :) And you can’t even tell how much it rained when I took this shot :)

This is a two shot blend. I used most of the photo from one exposure and then used the second one to darken the lights of the fountain a bit. Edited in Lightroom, blended in Photoshop. 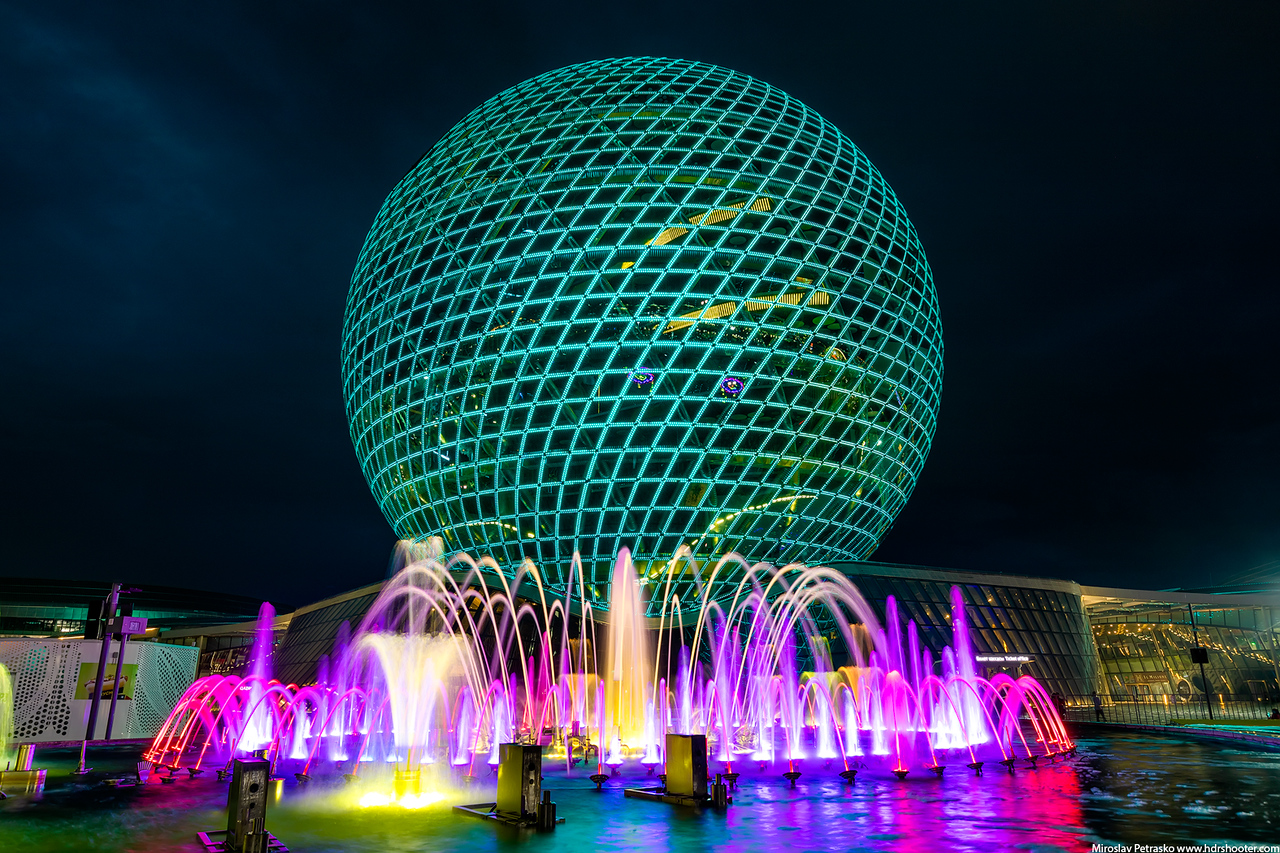 I mentioned few times that while taking photos in Astana, I had luck for a lot of rain. And this is where weather sealing of the camera and lenses comes into play. I used my Canon 5D mark IV in the rain a lot. Without any cover at all, just the camera. It works perfectly. This is the beauty of proper professional cameras. They are made to work in all situations. Of course I could not switch lenses when it rained, but one can’t have everything. And either way, the huge lens hood of the 24-70mm f2.8 lens, makes it the perfect lens to take into the rain. No drops will get on the glass :)

Here is a shot of the most dominant monument in Astana. This is the Bayterek tower right in the city center. I walked around a lot, trying to find some nice composition, to showcase the tower.

And of the the ones I got is also this view that shows the tower in the back. I used again the Formatt Hitech 10 stop ND filter (the more I take photo the more I tend to use filters :)) and I probably also used a polarizing filter, I’m just not 100% sure about it.

This is a three exposure blend. Photos edited in Lightroom, blended in Photoshop.

Before my visit to Astana, I have no idea how the city looks like. Just think about it. What would you image if you think of the capital of Kazachstan? When I got here I was stunned by this modern city with it’s many interesting views and beautiful works of architecture. Some of the building are just so huge. I could not get them into one shot, even looking from far away and high up :) You will see many of them in my upcoming posts.

And here is one of those great looking buildings. As I understand, this is the complex of administrative buildings of JSC KazMunaiGas, an oil company. It’s build as a circle with many fountains in side of it. And there is also a raised road crossing it, so you have just so many view you can get here. All around :)

For this I went close to one of the waterfall fountains and used the Laowa 12mm lens to get as much of the fountain and the building in the shot. And to get a bit of movement in the sky and blur into the water, I used a Formatt Hitech 10stop ND filter to push the exposure up to 30 seconds. I took 5 exposures, but in the end I blended only 2. Edited in Lightroom, finished in Photoshop. 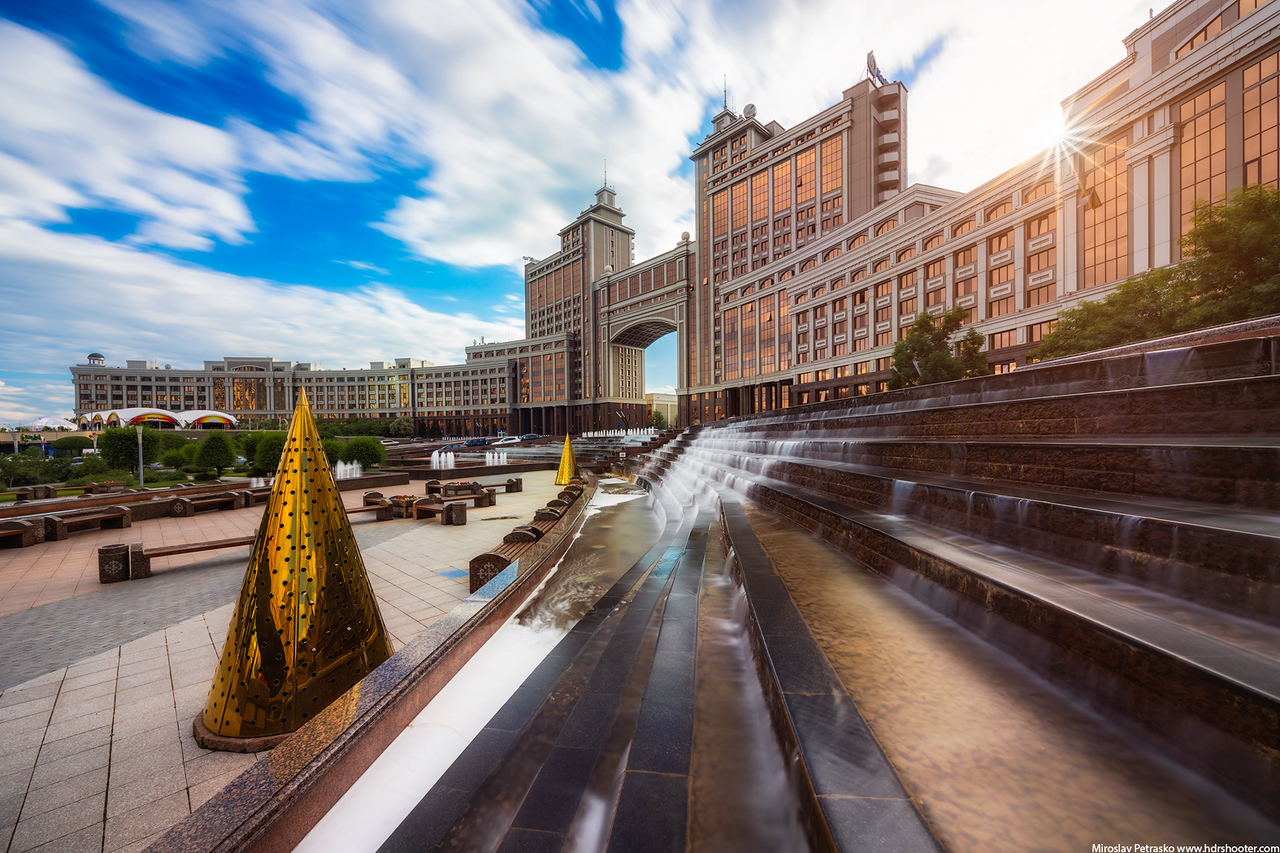 Some time ago I posted about my trip to Astana in Kazakhstan. And there I mentioned that I took many photos, but I was not able to share them with you yet. And from today, I can already share them, so I will :) So this week, all the photos I will share are ones from Astana. But as I have quite a lot of them, there will be even more over the coming weeks, but will mix in others from other places in between. Let’s start with one of the Expo 2017 sphere building today.

So let’s start with probably the coolest building in Astana. This is the sphere building that was build for the Expo 2017 exhibition that was in Astana last year. It just looks stunning. There are lights on the outside. There are lights on the inside. And there is a huge light pointing up (which you will see in one of the upcoming photos). All animates, all changes, all shows messages on the sphere. It all just looks great once the sun goes down and it gets a bit darker.

I spend few hours in the area and while it was raining most of the time, I did get some nice photos. Here is the first one for you.

This is a single exposure, with a second exposure used to remove the lens flare from the strong light on the right (you can learn how to do that here). Normally I would do few more exposures to get rid of the very strong light reflection on the right, but it was not possible here. I used the Laowa 12mm lens to take this shot, and while it’s a great lens, it’s not weather sealed. And it stopped raining only for minutes. In that condition, I just wanted to take as many photos I could before it rained again, which it did very quickly afterwards. 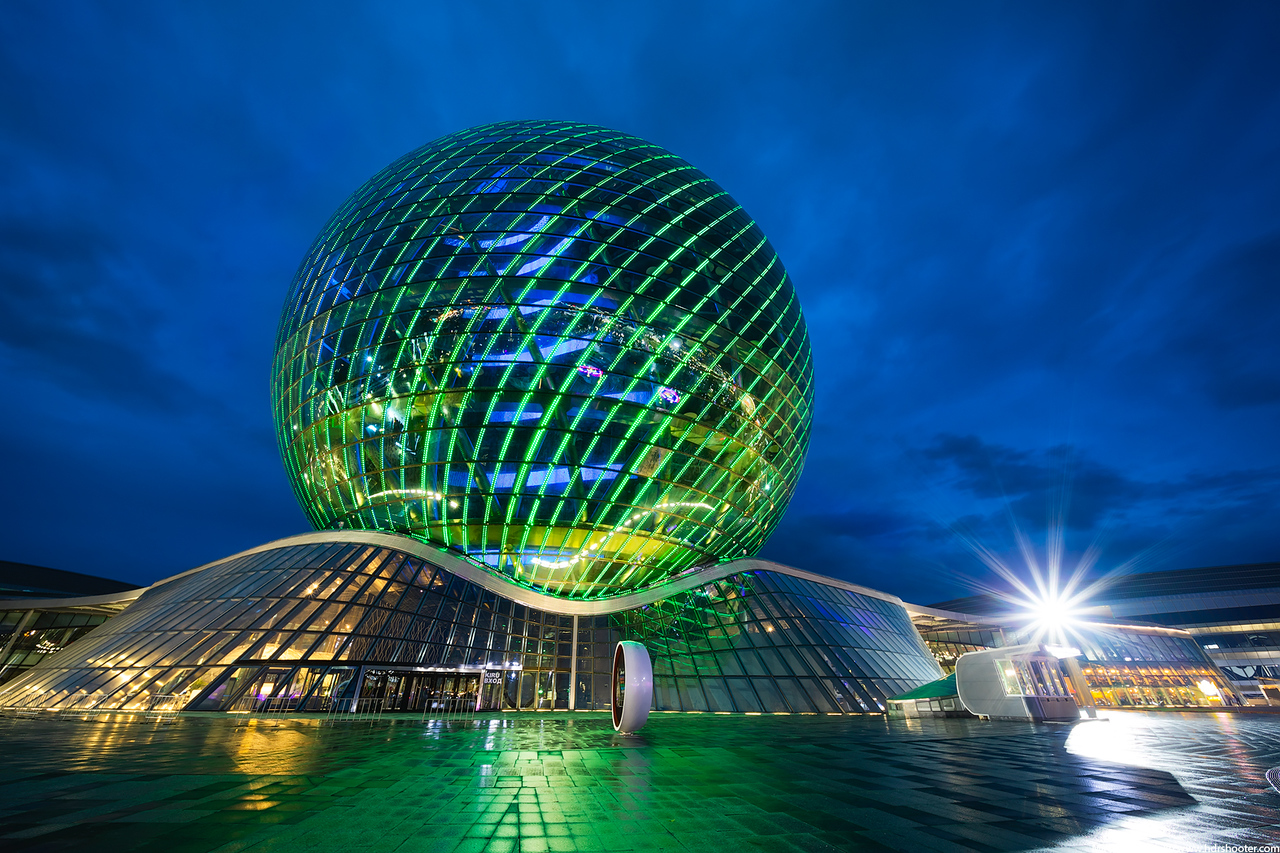